BACK TO EXPERT ADVICE

Myth #1: If I start and stop my urine flow I will build better bladder muscles.

"Kegels are a good idea, but they shouldn't be done during urination," says Roger Goldberg, M.D., director of urogynecological research at the Evanston Northwestern Healthcare in Evanston, Illinois. "Women who repeatedly stop and start their urine stream can develop overactive bladder."

Myth #2: A little leakage when I cough or sneeze is normal.

While it's true that leakage is common, "it's a misconception that bladder leakage is normal or inevitable," says Goldberg, who is also the author of Ever Since I Had My Baby: Understanding, Treating, and Preventing the Most Common Physical Aftereffects of Pregnancy and Childbirth. "At least 96 percent of women with stress incontinence can have their problem cured. It boils down to this is it bothersome to the point where it affects your quality of life? If so, there are many options for treatment."

Myth #4: If I do Kegels, I won't have any problems, even when older.

"Every woman can benefit from Kegels, as stronger pelvic floor muscles decrease the risk of bladder leakage," he says. "But for many women, Kegels are not enough to control the problem; they need a backup."

Myth #5: You should always go to the bathroom when you first feel the urge "to go" who knows where the next clean bathroom might be?

"Going just in case is fine in certain situations, but for many women, doing this on a regular basis can increase the risk of overactive bladder, with its symptoms of urge, frequency, or accidents on the way to the bathroom," says Dr. Goldberg. "Spoiling your bladder this way can cause problems over the long run. It's better to void the normal amount, which is every three to four hours."

Myth #6: If I have a big problem with urinary incontinence, surgery is my best option.

As stated before, both stress incontinence and overactive bladder are highly pervasive, even in younger women, Goldberg notes.

Myth #8: Pelvic exercises are useful only if you have bladder issues.

"There are lots of reasons to do Kegels, including maintaining pelvic tone and pelvic health," he says. "In addition, strengthening the pelvic-floor muscles can improve sex and help you avoid pelvic prolapse [a condition where the pelvic organs drop out of position]."

For more information about bladder-health myths, consult your physician.

Like JOIN US Print
Social Login is currently OFF.To enable click here and set Gigya in the Functional section to Active. 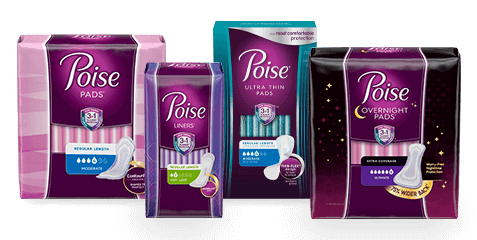 Answer a few quick questions to find the right protection for you and receive coupons!

With a 75% Wider Back, Poise® Overnight Pads are designed to help protect against leaks while lying down, for worry-free nighttime protection.