BACK TO EXPERT ANSWERS
Q & A

Can Impressa® Cure My Stress Urinary Incontinence? Can It Make It Worse?

Dr. Jennifer Berman is a recurring co-host on the Emmy award-winning talk show, “The Doctors,” and a practicing urologist with specialized training in female urology and female sexual medicine.

She first became known to TV viewers for her award-winning television series on Discovery Health, “Berman & Berman,” which she co-hosted with her sister, Dr. Laura Berman. Dr. Berman has gone on to appear as an authority on “The Oprah Winfrey Show,” “Good Morning America,” the “Today Show,” CNBC, CNN, America's Health Network and both local and national affiliates for NBC and ABC News, in addition to radio programs nationwide, and several leading publications.

Dr. Berman is also the co-author of the New York Times best seller “For Women Only: A Revolutionary Guide to Overcoming Sexual Dysfunction and Reclaiming Your Sex Life” and “Secrets of the Sexually Satisfied Woman: Ten Keys to Unlocking Ultimate Pleasure.”

Dr. Berman received her Master of Science degree from the University of Maryland Medical Center and her medical degree from Boston University School of Medicine. She completed her post-graduate urology residency training at the University of Maryland and received specialized fellowship training in Female Urology and Female Pelvic Floor Reconstructive Surgery at UCLA Medical Center. She was an assistant professor of urology at the UCLA Medical Center and co-founded the Female Sexual Medicine Center at UCLA in 2001, serving as its director.

Impressa® won't cure your Stress Urinary Incontinence (SUI), but it can definitely change your life by offering prevention that helps stop your leaks before they happen. And while it won't strengthen your pelvic muscles, it won't make them weaker either. Designed to help you temporarily manage your SUI, Impressa® simply gives you the freedom to go about your day without worrying about uninvited leaks, changing bulky pads or embarrassing odor.

Like Print
Social Login is currently OFF.To enable click here and set Gigya in the Functional section to Active. 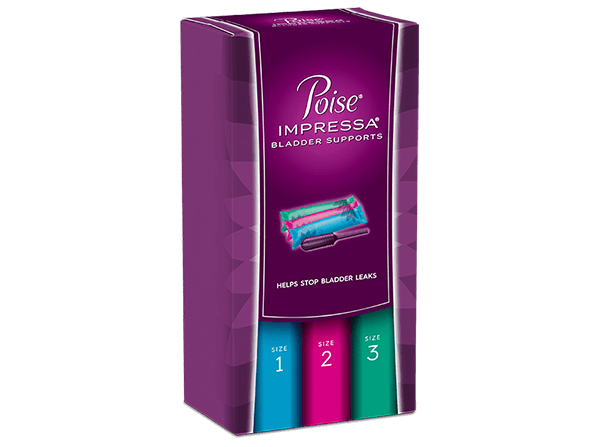 Save on Poise® Impressa® Bladder Supports with this valuable coupon.

BUY NOW
CLICK-TO-CHAT Available Monday–Friday. Sorry, our online chat is currently unavailable. Come back to chat anytime Monday–Friday. CALL US Need some extra help? Give us a call at (888) 546‑2911 SITE FOR HEALTHCARE PROFESSIONALS